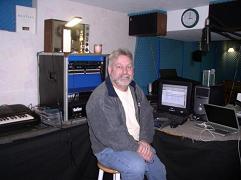 I've been learning to play guitar and sing for the last 35 years. No that's not a misprint…still learning as I go along. Torn between the variety of musical influences I've forged a style that is a blend of folk, rock, country and blues.I may in fact remind you of ol what's his name or you know that one group. That's about it, can't quite put your finger on it but I'll usually remind you of someone. Who knows maybe someday he might remind you of Rick Keane!

I first joined Songramp in 2005. I made some contacts and began colaborrating with other songwriters from around the country and the world. Songs were posted on Songramp for review by members and were voted on by the members as well. Many of the songs topped the chart for the specific genre. Several songs have received airplay including, "Life Sometimes Gets In The Way" which wound up at number 7 in Australia for airradio. Songs have been played on several syndicated indie broadcasts as well.

In 2007 I discovered Songsinc which was taking a new approach to song writing in a colaborative effort where the writer writes lyrics and a melody to a prerecorded track. It is referred to as trackwriting. As of January 08, about 15 songs have been written or cowritten and produced with Nashville demo singers including 5 that are currently being pitched by Chris Keaton Productions.

R-Kade is a current project along with long time colaberater and co-founder Rick Kuhn they present a mixture of Oldies, Motown, Pop and Country Rock to the local North East Ohio area crowds.